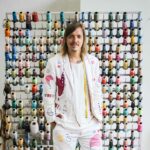 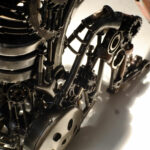 LIINA KLAUSS: CREATING BEAUTY – AND MEANING- OUT OF ‘LOST SOLES’ AND OTHER CAST-OUTS

Liina Klauss is a German artist-activist, or ‘artivist’ as she likes to call herself, living between Hong Kong and Bali. She specialises in ‘‘large-scale environmental art installations using man-made and natural waste as her art material, finding a visual language for the pervasive impact of humans upon the natural world” in her own words. She is well-known in Bali for one of her first permanent installations, the rainbow-coloured wave of flip-flops that adorns Potato head’s beach club entrance. However, most of her art is ephemeral: collected, created, then cleaned away, existing only on film and photographs (and people’s minds) after it has happened.

The art is fleeting, the plastic everlasting

Most of Liina’s artwork involves people, awareness-raising, and cleaning beaches. She gathers rubbish on beach/ nature clean-ups with a team. Then, with their help, the waste objects are sorted by colour (nothing is painted) and Liina creates beautiful, if temporary, multi-coloured art pieces exposed in public spaces, reminding us of the pervasive nature of plastic pollution and its endurance over time.

The whole happening is a joyous affair, yet it forces both those who participate in its creation and those who come to see it to be confronted with the issue of plastic waste, which they may not see in everyday life. She recalls how some of the team helping her In Bali were surprised by the amount of refuse on the North-Western beaches that are never cleaned.

The thing she loves about creating on the ‘island of the gods’, is the fact that people are very ”sensitive to materials and craftsmanship” and also that they are used to being outside so they are happy to participate in the events. In Hong Kong, which has a very different type of economy, most people work in Air-conditioned offices. It’s harder to find people who are comfortable sifting through marine refuse washed up on the beach, for hours, in the sun.

The challenges of permanent installations

The challenge of the permanent art piece ‘5000 lost soles’ that she created for Potato head beach club, is that it is made from thrown-out flip-flops, their plastic breaks down under the effect of the sun’s UV rays. The irony is that if the same plastic sandal were buried in soil, it would last for thousands of years but the sun breaks down the molecular bonds of the plastic, making it brittle. It turns into micro-plastic powder, harder to see, but which can get into absolutely everything, including human bodies. Liina is scraping off this powder and making plans on how to reuse it in her work.

Another challenge is that the art piece gradually looks bad so has to be redone, and when you redo it you have several challenges: what do you do with the waste of the previous installation, the micro-plastic powder but also what’s left of the flip flops. In making a new installation, you need to get new ‘old shoes’ and you need to be careful how you make it so it can be dismantled easily and have (some kind of) sustainability, explains Liina.

Thankfully, Potato head has helped in the whole process, both with the creative and logistical side and by providing staff to help make it happen. Another positive byproduct of this collaboration was sensitizing the people working at the beach club to Bali’s environmental problems.

Sustainability and the Artist’s responsibility

When she makes her ephemeral art pieces, she works with various recycling organisations (like EcoBali) and makes sure that everything-that-can-be is recycled or repurposed. The beach/ public space is clean and pristine after the event.

In making the permanent structures, however, you also want to make sure you are not adding ”to the mess”, as Liina puts it. She has had to think of a way of keeping the installation together that does not involve glue (which would make it harder to dispose of in future). The last installation used a bamboo base. This time, she has decided to sew the flip flops together with recycled fishing lines and nets found on beach/ ocean clean-ups. This is hugely time and labour intensive but, luckily, in Bali, Liina has no trouble finding people to help.

The micro-plastic powder remains a big issue. Firstly, it is pretty nasty to work with, you need a mask, it’s poisonous, it scatters easily into the environment. Secondly, it’s hard to decide what to do with it. Liina has been playing around with several ideas. Using it as pigment and mixing it to make a type of paint is one idea but the risk is it breaking down back into powder over time. Liina has recently got more interested in working with clay. She likes the duality and contrast of mixing the toxic brightly coloured microplastics with the natural ‘safe’ natural toned clay. (A duality she also explored in other work like ‘ involuntary pairs’). Another idea was to make a more conceptual art installation; with, for example, a pile of the power and a fan next to it. The fan would not be switched on, but one can imagine what would happen if it were, a metaphor for what is happening to our planet, perhaps?

A new generation of activists

When asked if she is involved in politics, Liina says she isn’t directly. She works with NGOs and her work is political because it makes people think and raises awareness but she doesn’t get directly involved. She is impressed with the work of two young activists from Bali though. One is Gary Bencheghib, who is involved with ‘Sungai Watch’, an NGO she collaborates with. Gary has been the voice of the new generation regarding plastic waste, his actions have gotten the attention of the government, who even sent out the army to help him clear heavily polluted rivers in Java and Bali.

Melati Wijsen from ‘Bye Bye Plastic Bags’ is another, not even 20 years old, and yet she has helped ban single-use plastic on the island of Bali, been invited to do a TED talk, and speaks like a politician but thinks like an environmentalist.

The importance of a positive outlook for the next generation

This new generation of fighters is inspiring. Klauss believes the older generation should not burden the younger generation with the responsibility of ‘the’ solution to pollution: “we tend to put this pressure on the youth: “oh yeah, we messed up. So you need to find a solution now”. According to her, a doom and gloom approach prevents people from thinking outside the box and has devastating psychological effects. “It’s really important to bring back a certain lightness, and a certain atmosphere of fun and creativity”, keeping the conversation open, seeing as many perspectives as possible, and coming up with new ideas and approaches.

Liina’s art is full of rainbow colours, ‘always happy’ as she puts it, and she feels like her message is getting across. When she dismantled her flip-flip piece, she discovered that others had added to it

This made her happy, feeling that her message was understood and that ‘You can see that people actually want to help and want to be part of the solution’. The challenge now is to find these solutions. She insists that nothing will come of hardliners, the future is all about collaboration, judgement and rejection will get us nowhere.

Leaving a mark and Future projects

Liina’s art pieces disappear (well, are cleaned away) like morning dew once they are completed. They are recorded as photographs and videos for posterity and communication, that is their only trace. In the modern world we live in however, this is a great way to get the message out there and spread it widely. “Photography is a great tool these days because you can communicate easily and broadly but you don’t have to say a lot, it speaks for itself.” She usually uses a drone and takes pictures of the volunteers herself but also collaborates with photographers and videographers.

She exchanges ideas with other artists but does not collaborate with them. She feels each person’s vision is too personal. The Balinese artist Ari Bayuji, who makes art out of discarded fishing nets, and the American Photographer Gregg Segal, who shoots people surrounded by 7 days of their own trash, have caught her eye recently.

Her future project is a book of the ‘improbable pairs’, an exhibition she had in Hong Kong. She showed pairs of very similar-looking objects with the sole difference that one was made by nature and the other by man. The Hong Kong Botanical gardens helped her classify and identify all the natural objects. She is now waiting on a grant to finalise the project and to analyse the man-made objects. This duality has been made even more clear to her recently when working with microplastics. The toxins it contains are very similar to human hormones and smell like a man’s sweat! “it’s crazy”, she says, “you can break it down to a molecular level and feel it, it’s amazing how close we are to nature and, at the same time, so far removed from it”. Hopefully, her work will help and inspire us to bridge that gap and become more in tune with our environment and our planet.

OLE UKENA : WEARING YOUR ART ON YOUR SLEEVE