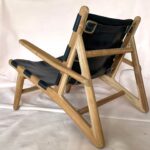 We recently met with Kevin Vignier, the dynamic founder of  ëCollabo8, and his brother Jordan Vignier, designer. This inspirational venture uses plastic waste collected from Bali’s rivers- or brought in by ‘The Body Shop’ customers- to produce a range of recycled plastic products. The new company’s main goals are to have a positive ecological impact, recycle as much as possible, raise awareness, create sustainable employment and help improve the lives of those in need.

Brimming with new ideas, Kevin openly welcomes creative collaboration with designers to increase the value of the raw material, plastic waste, sadly abundant across Indonesia and the world. Curious, modest and open to new approaches, Kevin does not hesitate to seek partnerships when he feels he comes up short in the necessary skills. Very down -to-earth, he likes to take things step by step, without rushing into anything. As a creative person who thinks outside the box, Kevin believes that pretty much everything can be improved upon and acts on it.

Kevin was born and raised in Reunion Island then went on to attend university in Los Angeles, where he also set up restaurants as a sideline. It was during his final-year internship that he discovered Bali, where he decided to settle in 2015. The original plan was to work in the villa rental business but Kevin, passionate about the sea and the balinese people, rapidly decided  to get involved in improving livelihoods and protecting the environment. His first idea of producing recycled-plastic bricks as building materials evolved and grew, to become a recycling and waste recovery project, always in keeping with having a positive impact on the natural environment

Started on a small scale, the project only had one oven to experiment with in the plastic transformation process to begin with. The first step is to clean the plastic in big tanks to clean away any dirt or residue. It is then ground into small chips in an industrial shredder.

Next, two options are possible depending on future use.

The first technique is called extrusion. The plastic chips are put into a machine which creates a mould out of them so they can be formed into a desired shape. These can be tubes or any other suitable shape. The creation of these moulds is on demand and they are made to precise specifications. The second technique uses normal pizza ovens; the plastic is put in a pan then melted and pressed to produce strong plastic slabs in a variety of colours. By playing around with the effects, all sorts of end renderings are possible.

Ëcollabo8 works closely with the brand ‘The Body Shop’, which sends them 1,2 tons of plastic every month; this is then transformed into various objects like soap dishes or pocket mirrors and sold in their shops. The amount of plastic sent over keeps increasing and should soon reach 8 tones a month. Puzzles are also made with the resultant materials in partnership with Mudfish, an organisation that works on education and awareness raising on ecological issues in Bali. From the recycled-plastic slabs it is also possible to make a number of other things such as license plates, scooter bodies, furniture (chairs, tables, doors) and much more.

There is no waste in the procedure since all the leftover chips and bits of plastic are ground up again and reused to keep the circle completely closed.

Three types of plastic are currently used: LDPE, HDPE, POLYPROPYLENE, with higher or lower densities. The different types are separated and used independently depending on need and the use they are destined to.

Strong partnerships and community involvement in Bali and around the world

eCollabo8 are involved in and work on all sorts of different projects. Having recently done up a shop using recycled-plastic slabs, they also participated in the design and construction of some eco villas in Pererenan a few weeks ago.

The start-up has partnered up with several local and international companies and organisations.

Their partnership with ‘The Body Shop’ has been a springboard to expand the reach of eCollabo8, currently only operating in Indonesia, to other parts of SouthEast Asia. The plastic provided by ‘The Body Shop’ comes from customers returning empty containers in exchange for  discounts on new purchases.

Sungai watch (‘River Watch’ in Indonesian) is another organisation they collaborate with, working on creating strong plastic barriers and nets on rivers to prevent dumped plastic from the river beds from flowing into the sea, particularly in the rainy season. A lot of the plastic is collected in the paddy fields, then used to make these barriers.

Eco Bali is another of their local partners with whom they collaborate on a number of ventures. Being very involved in village life, another project close to Kevin’s heart is supporting a local orphanage he knows and to whom he donates 20 percent of his profits and has veggies delivered to once a week.  So far, the eCollabo8 model has worked well and is profitable.

Looking to the future : eCollabo8’s goals

The main goal really is to recycle as much plastic as possible and stop using sand for construction in Bali. Indeed, Sand is becoming an ever scarcer resource in Indonesia. So eCollabo8 has gotten involved in the production of a new type of brick, which doesn’t use sand, and is sound, water and fireproof. There is a high demand for these bricks so the idea is to mass produce them. The project should come to fruition in a few months.

Other aims of the company are to do more awareness raising and help more orphanages. The idea is to create a foundation to help with this.  Supporting women’s empowerment is also on the agenda.  This could be done by providing training and eventually work for rural women. Many women, especially in the countryside, have no real access to a proper education in Indonesia, so this could provide new career paths and better working conditions.

Future plans also include opening franchises in other Asian countries, with Malaysia most probably being the first. Kevin’s main aim is for the growth to be organic, to take things step by step and not cut corners. The idea is to have a positive impact and inspire others to participate in new solutions and to emulate successful ones.

What is important is to show that you can turn a profit by recycling and upcycling waste and  that the positive impact opportunities are endless.